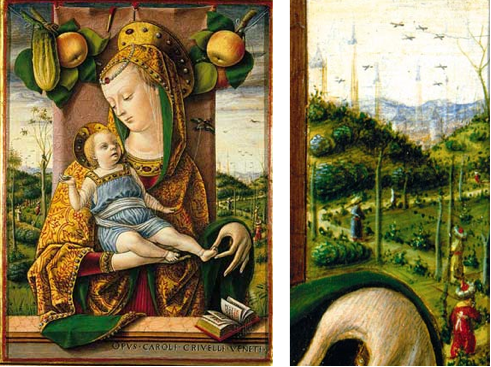 Among the many works of art, in which archaelogists and historians have found strong evidence of aliens and UFOs, we shall introduce the most significant ones.

They represent testimonies of events that are out of line with any natural, religious and conventional logic.

1 – In this painting, which depicts the nativity with the figures of the Madonna and Saint Giovannino, of Italian Renaissance school (15th century) attributed to the Florentine master Filippo Lippo as well as to Ghirlandaio and De Tondo Miller, there appears to be a flying object on the top right-hand side that is distinct from the sun.

The characteristics of this disk-like object and the setting (bottom) which comprises it, are undoubtedly unique; a shepherd and his dog that seem to be awed by it, is really impressive. What did the painter want to reveal to us in this painting?

2 – Madonna and child (1480) by Carlo Crivelli, is preserved at the Pinacoteca Civica, Ancona – Italy.

UFOS AND ALIENS IN THE PAST?

In the background we can see same objects, which resemble missiles that seem to be shooting towards the sky, in a country setting full of strange characters wearing funny oriental-style headgears. What did Crivelli really intend to depict? Perhaps something that he had seen or something that he had read in ancient chronicles?

3 – The Annunciation (1486) by Carlo Crivelli, preserved at National Gallery in London.

A circular object stands out at the top of the painting; a sort of double golden ring, which emits a ray light that cuts through a small opening of the building on the right.
The ray first hits the dove, then it touches the Virgin Mary’s head.
In the bottom-center part of painting, we can see a man covering his eyes from the intense light.